Kit was probably born on 4 September in 1875, at the Band of Hope Mill. Neither her birth certificate or registration of baptism have yet been found and many documents have contradictory information in this regard. Kit was the sixth child, the fourth girl. Her two older sisters would have carried the burden of daughterly responsibilities in the home, and her sister of two years earlier, Hannah, may have been a cause of special concern from her early years. So, Kit would have found herself with comparative freedom compared to her older siblings.

She joined her siblings at Moorabool West State School before she was five. When she was about 8, the family had moved on to Bolwarrah, by this time her comparative freedom was gone. She had now three younger sisters and a baby brother. Kit would have had to care for her little sisters.

It was in 1890 that the family’s fortunes changed. The parents and their 12 children now moved to Green Hills, to the property they subsequently called Rovanna. Green Hills was once a part of a wild mining community, by now it was much quieter, but still very rugged country. This property was sufficient to enable the family to be self sufficient and gave promise of financial security and stability. There was a gold mine in the backyard. The next few years were filled with hope.

Kit was 16 when her older sister Mary married and 17 when her brother Joe married. She would have closely observed these events and the effect on the family. With Mary gone, Kit’s household responsibilities would have increased. 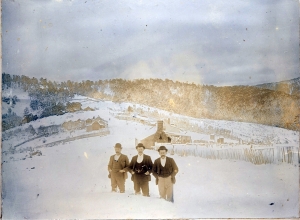 When the promise of the early nineties faded as the depression throughout Australia began to take its toll, in 1897 Carlo Monighetti sold his restaurant in Melbourne and opened the Monighetti Club and Restaurant in the remote mountainous gold mining community of Matlock.

The next year he and Kit married at St Mary’s in West Melbourne. At the time Carlo was staying in Hawthorn (a Melbourne suburb) but living in Matlock. Kit gave her address as the family home, but her usual place of residence was also Matlock. Carlo gave his occupation as a cook, Kit described herself as a lady.

They married early February and a daughter, Mary, was born later that year: she did not live long. At that time, infant mortality was still very high.

Kit and Carlo were probably glad to see the end of the old century.

The young family in Matlock

The grieving parents soon had a young family to keep them occupied. In Matlock, Kathalena Eleonora (Kath) was born in 1900, in 1901 Charles Alexander was also born, in 1903 Joseph Venanzio (Vene) and then Roy in 1906. While the family were growing, so was Carlo’s business interests and Kit was actively involved in learning the business also.

In 1903, Kit was registered as a wine shop keeper on the electoral roll of that year, while Carlo was the cook. But they were not alone. Sophie, Kit’s younger sister was helping keep house and care for her sister’s children. As can be seen in the accompanying photo, also with Kit and Carlo at this time were Kit’s mother, Kate, Taresa and Sophie. Perhaps in the photo were other unidentified Mattei men or even Taresa’s future husband Jim Dare.

This establishment, provided good training for Kit and consolidated her family’s future, while her husband prospered sufficiently to branch out into Woods Point.