This past summer 2010 I did not visit my cousins in canton Ticino; this was only the second time since 1995 that I have not. Since 1979 I have had the opportunity to visit them around 20 times!

In 1979 my friend Randy and I were traveling throughout Europe for the first time with a Euro rail pass, and I wanted to visit my grandparent’s village of Gudo in the Italian-speaking canton of Ticino. What was supposed to be a five-day stay, turned into 15 incredible days of getting to know my Ticinese cousins for the first time. This experience completely changed my life. When I returned home, I began studying Italian at California State University, Sacramento in order to better communicate with my cousins during my next visit in Switzerland. The result was that I changed my major from business to Italian language and culture.

During the 1981-82 school year, I spent my junior year abroad in Florence, Italy. During this period, I visited Ticino three times: in September, in December and January, and in May. In fact, I experienced my first white Christmas when there was record snow falls in December 1981.

Cleofe, Maurizio, Tiziana and Me.  Cleofe married my grandmother’s younger brother Giuseppe.  Maurizio and Tiziana are their children (1979)

During my three visits, I had my first opportunity to use the Italian (which I had learned at the university in Sacramento and Florence) with my relatives. At first, it was very challenging, but after a short period of time, I was able to communicate quite well with them. 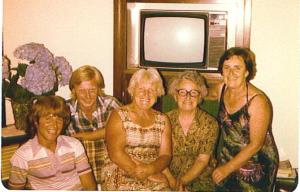 Me my cousin Danilo, his mother Maria, my grandmother’s (Annetta’s) sister Olimpia, and my cousin Anna.  Anna and Maria are Olimpia’s daughters (1979)

However, in 1990 I spent two and a half months in Ticino and Italy. In fact, I even made it down to Sicily for ten days. This time from a linguistic point of view, my visit in Ticino was much easier; however, I still had to deal with the fact that I did not speak dialect (and still do not), and more importantly, I did not understand it (I understand it better now). Even though Italian is the official language of canton Ticino, for majority of Ticinesi, the Ticinese dialect is their first language. Yes, it is a northern Italian dialect, but nonetheless, it is much different from the Standard Italian that I speak.

I had to wait another five years to return to Switzerland, but I made it back in 1995, and from that time forward, I only missed two summers going there: in 2003 and 2010. (In 1994 after ten years of living in Berkeley East Bay area, I returned to live in Sacramento I was hired as lecture in Italian at the University of California, Davis. Davis is a city about a half hour’s drive west of Sacramento.)

Agostino, Manuela, Giulietta  Giulietta is my dad’s first cousin on his mother Annetta Bacciarini’s line of the family.  Agostino is Giulietta’s husband.  Manuela is their daughter (1979)

I would like to mention that beginning in the late 1990s I begin using a car (a loaner from my cousins or a rental) to explore the Ticino. I had already visited many times the Valle Verzasca, and in particular the village of Lavertezzo noted for its beautiful Romanesque bridge; however with the car I was finally able to visit in the mountains above this village, two of its small hamlets of Sambugaro and Rancone. This was very special to me: my Grossi side of the family originated in Sambugaro before coming down to Gudo in the Magadino Plain in the late 1600s or early 1700s; and my Bacciarini side of the family (my grandmother was a Bacciarini) originally came from Rancone before arriving in Gudo in the 1800s.

Moreover, with this mechanized means, I really began to explore all the areas of the Italian-speaking part of Switzerland including the Italian speaking areas in the Canton Graubunden. This canton borders Canton Ticino, but is primarily a German-speaking area; however, there are four Italian-speaking zones in this Canton where Italian is spoken: in Val Mesolcina, in Val Calanca (both areas border the Ticino), in Val Bregaglia and in Valposchiavo (the latter two regions do not border the Ticino; in fact, the artist Alberto Giacometti came from the Protestant Val Bregaglia). With public means of transportation, it would have been very difficult and very time consuming to visit these other Italian- speaking areas of Switzerland.

I would also like to mention that in the late 1990s, I met by pure chance for the first time my cousin Tony Quinn. During this period Tony was beginning to do genealogical research on our family. Tony would go on to become one of the foremost experts (along with our late friend Rae Codoni) in Ticinese genealogical research. Thanks to both of these gentlemen, I was able to trace my Grossi and Bacciarini lineage back to the 1600s in Lavertezzo!

Tony and I visited together a couple of times Ticino in order to do genealogical research in the Cantonal Archives in Bellinzona and in the various archives of the small parish churches found throughout the Italian-speaking part of Switzerland (I should say that Tony did the research, and I help him with translating from the Italian to the English). During these visits we became very close friends with two distant cousins from the village of Monte Carasso: Marco Rapetti and Antonio Guidotti. I would consider Antonio one of the foremost experts in Ticino on Ticinese genealogy. Together Tony and Antonio have done much very important genealogical research! I would also like to add that both Antonio and Marco have become two of my closest friends in Ticino!

In 2007 I became director and instructor of one of the University of California, Davis summer programs in Rome, Italy where every summer I spend around five weeks teaching a group of American college students about Italian culture and history. This was a great opportunity for me; however, unfortunately it also meant that I would not be able to spend as much time each summer in Ticino with my relatives. Now I would be able to spend at the most tens days there whereas earlier during my month and half to two month stays, I would spend at least three weeks there. In fact, with great sadness, this past summer 2010, I did not even have the time to visit my cousins; I had to return right away to California to teach.

I really hope that I will have some time in the summer of 2011 to return to Canton Ticino to begin another 30-year run of visits! I really want to get to know the next generation of my cousins!

10 thoughts on “Thirty years of traveling to Canton Ticino; journeys of a lifetime”