Elvezio Giuliano Lesina was born April 18, 1878 in Giumaglio to Giuliano and AnnaMaria Giumini-Lesina and died February 26, 1951 in Crescent City, California. He was the youngest of five children, three of whom immigrated to California. 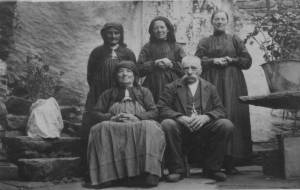 In the year 1899, a few months before turning 21, Elvezio left his home in Valley Maggia for La Havre, France to board a ship to come to America, as did so many other Swiss. Elvezio arrived in New York and then proceeded to Crescent City, California, having chosen that location as his two brothers Pacifico and Giuseppe Santino (aka “Joe”) had already immigrated there. The sisters, Erminia Lesina (Giumaglio) and Angelica Lesina-Lafranchi (Coglio) would remain in Ticino. Note – History did repeat itself with the next generation, as well – the two sons of Angelica, Alfonso Lafranchi (born December 17, 1886 – Coglio) and Alfredo Lafranchi (born December 18, 1892 – Coglio), both immigrated to the states via Seattle, Washington, while the daughters remained in Ticino. Angelica’s husband had come to Seattle, around the turn of the century, but had returned to Coglio.

Why was Crescent City chosen?  We do not know – but we do know that other families from both Val Maggia and Valle Morobbia were already established in the area.  Crescent City is located in the northern most part of California on the coast line; it is part of Del Norte County. Where there was/is a small population of Ticinese including, Sarina, Rossini, Martini, Pozzi, Lafranchi, Martinelli, Cravelli, Del Ponte, Togni, DeBernardi and so on. Most were dairy farmers.

Not much is known of the early days in California. Pacifico, we know returned to Ticino on at least one occasion as he married Maria Delfina Piezzi (born April 08, 1878 – Giumaglio) on June 11, 1901 in Giumaglio and by then was a citizen of the United States.  They had two children, Marie Amelia (born August 08, 1901) and Valerio Giuseppe (born April 11, 1903), both born in Giumaglio. Pacifico returned to the states in 1903.  In 1905 Delfina and the two children left Ticino for La Havre, France, where on October 25, 1905 they boarded the ship, “La Gascogne” and arrived at Ellis Island on October 30, 1905, then proceeded to Crescent City.  Together Pacifico and Delfina would have seven children.

Giuseppe, “Joe” is believed to be the first of the brothers to arrive in the states, no records exist, except that he is noted in one census in Sonoma County prior to 1900.  In Crescent City he would marry Eva Picard a woman from Oregon and together they had three children. Joe and one of the sons would both die in Portland from the Influenza out break in 1919/20.

The three Lesina brothers operated a small saloon from around 1906 thru 1910, which was called the Blue Front; this was located next to the Swiss Hotel which was operated by the Togni family. 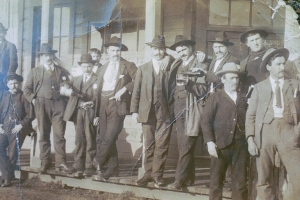 While living in Crescent City, Elvezio had met a Caesar Martini (born October 23, 1882) who was from St Antonio, Valle Morobbia and had immigrated to California about 1899.   Caesar, at one point, sent for his sister, Erminia Martini (born July 20, 1890), and also arranged a marriage between her and Elvezio.  On August 27, 1910 at the home of G. & G. DeBernardi, Elvezio and Erminia were married.

Shortly after their marriage, Elvezio (aka Ed”) and Erminia along with his brothers, Pacifico and Giuseppe and their families and Erminia’s brother Caesar all moved to Glide, Oregon to operate a ranch. Giuseppe and his wife would stay in Roseburg and operate a small store.  On October 27, 1911 Caesar and Elvezio went hunting near Honey Creek, east of Glide, Oregon and Caesar was accidentally shot. He had laid his gun down on the wagon and had gone to unhitch the horses, having placed the harness on top of the gun he later reached for the gun, pulling it towards himself and the gun accidentally fired. Elvezio loaded him into the wagon and returned to the ranch – a doctor was sent from Roseburg, but it was too late, he died at age 29. The newspaper article states that he was prepared to return to Switzerland shortly after this hunting outing as his father had died on September 19, 1911 in St Antonio. While living on the ranch in Glide, Elvezio’s two nephews, Alfredo and Alfonso Lafranchi, who had immigrated from Coglio to Seattle came to Oregon to work for him on the ranch, they also worked for a time in Giuseppe’s store in Roseburg.

Giovanni Lafranchi, was the husband of Angelica Lesina, and he had left his home in Coglio and arrived at Ellis Island June 04, 1899 on the ship, “The La Champagne” having departed La Havre, France – May 27, 1899.  He spent several years in the Seattle, Washington area working.  It is said that he or Alfonso did spend some time working on one of the Canadian islands as well.  He returned to Coglio about the time his son, Alfonso, came to the Washington.  Alfonso arrived at Ellis Island on the ship, “La Gascogne” having departed La Havre, France September 14, 1903. His final destination was 115 James Street in Seattle, Washington – this is where his father, Giovanni was staying before his return.  Alfonso worked in the printing industry in Seattle.  He then received a letter from his younger bother, Alfredo saying he would be coming to the states; the letter arrived the same day Alfredo arrived in Seattle.  After working for their uncles, both Alfredo and Alfonso attended Oklahoma A & M – now Oklahoma State University at Stillwater, Oklahoma.  Alfonso would marry there and would return to the Seattle area.  Afredo would never marry and would work on government projects in Alaska, Oregon and California – finally living in the San Francisco in the North Beach area.

The uncles of Elvezio both on the Lesina and Giumini sides had immigrated to Australia during the gold rush – the Lesina uncles stayed in Australia while the uncle Giumini returned to Switzerland.  Elvezio also had first cousins who had emigrated from Ticino, and were living throughout California, his family included, Muscio, Franscioni, Giumini, Volpi, Maisetti, and Ferrari.

3 thoughts on “From the village of Giumaglio, Val Maggia”